I recently phantasized about applying for a job in Central Ombudstopia and received the following imaginary letter in my Snoozle mail.

Thank you for your application to our open position for assistant professor of Wishful Thinking, with subfield specializations in Fairy Dust and Invisible Unicorns. Since you are applying from abroad, I’d like to explain the search process here at the University of Central Ombudstopia.

The most important thing to know about our search process is that we will invite only one candidate for a job interview, after we have made a job offer. Over the next week, the search committee will peruse all 100-or-so job applications that we’ve received. Based on the criteria communicated in our extensive job advertisement, we will select a shortlist of five candidates. We will then consider these five candidates carefully, based on the documentation that they have submitted. If you are one of these candidates, we may contact you by email at that stage, to obtain answers to any questions we may have. For example, we may ask you to provide additional evidence in support of qualifications and experiences that you list in your application documents, or to clarify any ambiguities that we may encounter in your application materials.

Based on the review of finalists, we will make a job offer to one of the candidates. If you are that candidate, you will be invited to a campus visit, before you accept the offer. The purpose is for you to decide whether our institution is right for you, and for us to persuade you to come. You can also discuss with us any needs and conditions that have to be satisfied for you to accept the offer. At that point, we are legally barred from rescinding the job offer to you, except under certain rare circumstances (falsification of supporting documentation, misrepresentation of qualifications, legally disqualifying criminal records, and the like).

If you accept our job offer, the campus interview will be the initiation of an ongoing effort to support your success at the University of Central Ombudstopia. We offer development opportunities and support services for faculty community building, professional mentoring, and skill development through workshops, institutes, and learning communities. We are committed to an inclusive work environment that will enable you to combine high-quality teaching with scholarly productivity and engagement in the university planning and administrative process.

Please let us know if you have any questions about this process. We look forward to considering your application. 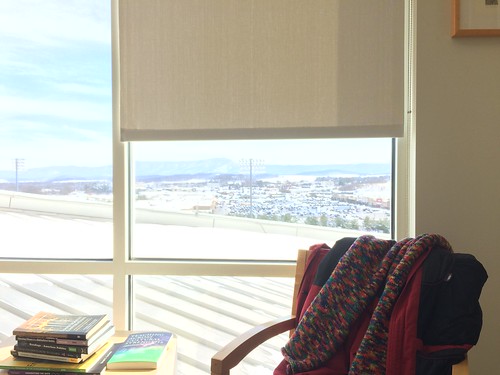 I stole the week note idea from Doug Belshaw. Thanks, Doug!


Back to the old trot

The jet leg is wearing off! Upon returning from Germany, it was nice that I could go to bed between 9 and 10, and immediately fall asleep, waking up again around 5. This meant that I could get an hour of writing in before breakfast. Unfortunately, this is getting more difficult now, though I try to keep it up. Have to go abroad for another week, I guess!

On Tuesday afternoon and Wednesday, JMU was closed due to snow and ice. This was a welcome opportunity to catch up with some work, particularly on Wednesday, since I didn’t have time for my commute. Of course, this was off-set by some time playing in, er, shoveling, snow.

Sadly, we also had to cancel a committee meeting early on Thursday, since several members were not able to make child care arrangements in time: public schools were closed as well.

I finally finished my piece on professional identities of educational developers. Even though it seemed to be almost done by late Tuesday, it took me another full snow-day of work on Wednesday to finish it. It’s not a great piece — mainly literature review with theory and discussion — it was an invited contribution, and I was so late that it might get rejected by the editors. If this happens, I won’t be mad, since it’s just fair, and the piece really isn’t great (but I am not one to aspire to greatness).

I always find literature reviews to be hard going: How do you combine summaries of different sources into a coherent argument? That’s tough! I hope I’ve been fair to the sources, have not omitted anything important (but I ran out of the allotted space anyway), and did not misrepresent any author.

Whether the piece gets published or not, I now have much more clarity in my readings. I cannot wait to carefully re-read the sources that I used, and to discover new sources that I coulda/shoulda used.

On my Germany trip three weeks ago, I finish Eleanor Catton’s The Luminaries. Plane trips are great to get through thick books. I liked it: beautiful, well-written, entertaining, with interesting narrative tricks. It didn’t bowl me over as, say, Larry Durrell’s first two Alexandria Quartet volumes (but I’m not the same person).

In Germany I started Herman Hesse’s Der Steppenwolf, picking it up from my mother’s book shelf. I am prejudiced against Hesse, partly because of his corny and involuntarily comic poetry. Der Steppenwolf is more readable, but in many respects it confirms my suspicion that Hesse is overrated. More on this at another time, maybe.

I’ve also started Sophia, der Tod und Ich, which I bought on a whim at a bookshop. Worth it! Good example of German humor at its best. I am also giving Captain Blaubaer another try. I needed this combination, I felt: Something serious, interesting, but pretentious; something seriously humorous; and something that’s a bit of a silly romp.

Tragically and unexpectedly, Lee Ann Fujii died about two weeks ago. Here is her article on the lack of diversity in political science that all political scientists should read.

The Journal on Excellence in College Teaching has a special issue out on “Coaching and Leadership in Academia.”, co-edited by Jim Sibley and Susan Robison, whose work has provided me with a number of good ideas in the past. Interesting stuff! Coincidentally, a bunch of colleagues at JMU have started a conversation about how coaching and a coaching approach to mentoring can be useful in a number of ways in teaching and faculty support work. Nice!

In the Oratorio Society of Virginia, we’ve started rehearsing a piece that we’ve commissioned for the 50th Anniversary of the choir: A piece by Adolphus Hailstork on a text by Rita Dove. I did not realize how thrilling it is to get to know a piece of music that nobody has every heard. The piece is titled “The World Called” and uses Rita Dove’s “Testimonial.” If you’re around Charlottesville, you can hear the piece on May 25. And here you can read “Testimonial.”
Posted by Andreas Broscheid at 3/23/2018 10:09:00 PM No comments: Links to this post